Part travelogue, part memoir, Katharine Norbury’s moving and lyrical story of self-discovery – told through journeys on foot along the glittering rivers of Britain – is nature writing at its finest. For fans of Helen Macdonald’s H is for Hawk and Cheryl Strayed’s Wild, Katharine Norbury’s memoir is a powerful tale of grief and redemption.

We were lucky enough to get some time speak to Katharine about her stunning and immensley personal debut novel.

The Fish Ladder is such an honest memoir about your own personal self-discovery, had you always intended to publish it?

When I first started to write The Fish Ladder I intended it to be an account of one summer holiday spent in Wales with my daughter Evie, then 9 years old. We were living in Barcelona at the time, where the holidays are almost three months long, so we were alone together for several weeks while my husband worked and the British schools had yet to break up. We came up with the idea of following a river from sea to source after reading The Highland River by Neill Gunn. But in the first instance the writing was a private thing, an heirloom if you like, for Evie to remember the summer by. When I developed cancer what had been a fairly lyrical meditation on ideas about identity became literal as I tried to obtain a family medical history. I realised that I couldn't ignore this new direction and so I continued to write, and to walk, through the cancer and towards my own source in a very concrete way. As I was doing this I could see that the writing may well have a wider readership than simply that of a private journal, and The Fish Ladder grew from there.

What does Evie think to your adventure together now being available in print?

Evie is now a typical and very charming teenager. She takes things as she finds them, seems surprised by little, and is interested in her own writing, music and acting (she did the illustrations for the book). Her father is the writer Rupert Thomson and he has published many books throughout Evie's lifetime, so the idea of "being in print" per se seems quite normal to her… She has already appeared as a baby in his memoir This Party's Got To Stop. If she thought that anything was unusual, it was that I had picked up a pen!

How do you feel about ‘The Fish Ladder’ being compared to the award winning novel ‘H is for Hawk’?

I am delighted. I hugely enjoyed H is for Hawk and joyfully embrace the comparison. I had an anxiety, before publication, over the number of genres that The Fish Ladder covers. It had begun as a travelogue infused with nature writing and evolved very organically into a memoir. When H is for Hawk appeared it very successfully bridged the genres of nature writing and personal memoir and that makes it very easy to talk about The Fish Ladder. F is for Fish!

‘What a delight! The Fish Ladder is a luminous sort of book, beautifully written, darting here and there like a kingfisher over a stream. A beautiful, strange, intoxicating and utterly unique story’  Philip Pullman

You are a trained film editor, would you ever consider turning ‘The Fish Ladder’ into a film?

Film editing has very much influenced The Fish Ladder. I am fascinated by structure, and although it is a work of life writing the book falls into three clearly discernible acts with a prologue and and an epilogue. It starts as something very loose, and volatile, that occasionally runs into cul-de-sacs and loops back on itself, like the place where a river meets the sea. As the book progresses a direction becomes discernible and the prose acquires a calmness and a more informed sense of where it is going. As Evie and I approach the literal and metaphorical sources of the river, and of our family, there is a renewed tension as well as various obstacles and set-backs before an equilibrium, albeit hard-won, is established. The 'protagonists' are in a very different place, spiritually and metaphorically, from where they started. In this way the book adheres to a fairly classic filmic structure, and I probably had no choice in this, because after years spent in the cutting room and as a script editor it's how I have been trained to think. I doubt I could have done it any other way! I am very much influenced by the documentaries of Adam Curtis, with whom I once had the privilege to work. I would love The Fish Ladder to be a film if the opportunity arose.

You have always had an appreciation of the British countryside, do you have a favourite place that you are always drawn back to?

Yes, several. I am quite nomadic and there are a number of stations on my own particular song-lines to which I often return. The Mid-Cheshire Ridge runs through the landscape in which I grew up. The Lake District is particularly close to my heart, especially the Wasdale Valley where I have spent many hours walking on and around Scafell -- which features in the book in a chapter called Innominate Stream (being the water that runs alongside Brown Tongue on Scafell). The Llyn Peninsula has been a home to me for the past nine years and I have become drawn to Nefyn Bay and Garn Fadryn. And the A9 in Scotland has a particular emotional significance. Most of my childhood holidays were spent not too far from it, it as it winds from Stirling to Thurso. I retrace this same route in The Fish Ladder. The River Thames has also played a significant healing role in my life, and I stand alongside Ratty and Mole and Jerome K Jerome as a fellow "Thames pilgrim".

‘The Fish Ladder is a beautiful book. An exquisite example of ‘new nature writing’…
A generous, moving book and extraordinarily well written too’  Sara Maitland

Katharine Norbury was abandoned as a baby in a Liverpool convent. Raised by loving adoptive parents, she grew into a wanderer, drawn by the landscape of the British countryside. One summer, following the miscarriage of a much-longed-for child, Katharine sets out – accompanied by her nine-year-old daughter, Evie – with the idea of following a river from the sea to its source. The luminously observed landscape grounds the walkers, earths them, providing both a constant and a context to their expeditions. But what begins as a diversion from grief soon evolves into a journey to the source of life itself, when a chance circumstance forces Katharine to the door of the woman who abandoned her all those years ago.

Trained as a film editor with the BBC, Katharyn has worked extensively in film and television drama. She is a graduate of the Creative Writing MA programme at UEA and teaches writing about place to US undergraduates at CAPA International Education. She lives in London with her husband Rupert Thomson and daughter Evie. The Fish Ladder is her first book. @kjnorbury 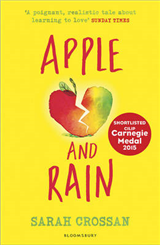