Author James Long speaks to us about his latest title The Balloonist.

Your publisher’s website describes the book as ‘informed by vivid research’.  What sources did you use to collect relevant information for your story?

I have always read First World War memoirs avidly – being of a generation that grew up amongst the reticent survivors of that war. I knew of the balloon observers but it was only a few years ago that I came across a copy of the only long account written by an observer who survived – Goderic Hodges' Memoirs of an Old Balloonatic. It has been out of print for many years.

Hodges survived his time in the RFC and there is some irony in the fact that he probably owed that survival to being seriously injured – caught in a shell explosion while visiting an artillery HQ. That ended his perilous career as an observer. I then went searching for every other fragment of balloonist history I could find.

I also wanted to start the story in the first few weeks of the war, before the trenches of the Western Front made their appearance – the mobile war of what became known as 'the race to the sea'. For this I found a rich source of information in the contemporary accounts of American reporters who covered that part of the war from both sides.

The destruction of the Belgian forts at Liège and Antwerp was next on my list and again, witnesses from that time left detailed accounts of the appalling conditions inside those forts under fire from the German's secret weapon, the vast new Krupp howitzers.

“I investigate my surroundings for the unusual and then tease away at it to make sense of it. This may be genetic. My father (a wartime fighter pilot himself) joined the peacetime police because as he once said, so many things seemed to happen around him that required calling a policeman that it seemed a whole lot simpler just to become one.”
– James Long, Author

I had always wondered what happened at the northern end of the front lines. Did the trenches just somehow end at the sea? That took me to the extraordinary story of the inundation – the flooding of the low-lying fields west of the Yser river all the way to Nieuport on the coast. Research told me of the heroic action of an unlikely handful of elderly Belgian civilians who helped bring this about. That was arguably all that prevented a rapid German victory. If the Channel ports had fallen, as looked inevitable at the end of October 1914, then the war really would have been over by Christmas.

That left action research and above all, I wanted to get some idea of what is what like to be in a wicker balloon basket, tethered by 5,000 feet of thin steel cable, high above the front lines of the Ypres Salient. Nobody flies tethered hydrogen balloons these days and that is not at all surprising considering those highly inflammable qualities of hydrogen which cost so many wartime lives. Instead I found a brave Belgian hot air balloon pilot who was prepared to try a little reenactment. Such balloons normally fly at little more than 1,500 feet but that afternoon, people in the streets of Ypres were startled to see a balloon flying over them far, far higher than they had ever seen before. From up there, we had an astonishing view far across the Salient, dotted by its myriad scatter of white-stoned war cemeteries in all directions and the ghosts of the old trenches showing clearly in the fields. We even had a taste of what it felt like to be under attack as two microlite aircraft struggled up to our height, circling us to investigate – their engines popping and spitting like the Fokkers or the Albatros of a century earlier.

WWI has inspired so much fiction and poetry.  Were their particular examples that inspired you to write this novel?

There was one particular book about the war in the air that mattered to me a great deal. I have read most of the pilots' accounts that have been published. I know my Clerget Camel from my Bentley rotary and have some idea how to clear a Lewis gun blockage on an SE5a. Those non-fiction accounts are inhibited by the stiff upper lip of the time. They are very good on technicalities and dog-fight descriptions. Some (Cecil Lewis in Saggittarius Rising for example) reach occasional poetic heights but they tend to be much less informative about what it really felt like to be up there or down on the ground afterwards. That was left to a real wartime Sopwith Camel ace, Victor Maslin Yeates, to write about in novel form fifteen years after the war ended as he was dying of TB. The book is Winged Victory – I almost said 'was' but of course the book still 'is' and in that sense Yeates 'is' too. In more recent years, Derek Robinson has reoccupied that territory very well with a series of novels and I'm sure Yeates inspired him too.

The dramatic plot of your book could suggest a film treatment.  Have you had any thoughts about or interest in this?

That would be nice, wouldn't it? Or would it? Some of my friends have been through painful experiences in seeing their books adapted. I admit I would like to face that test. I don't think about it much because my chances of influencing the outcome are about the same as my chances of being deliberately struck by lightning by standing in a field. 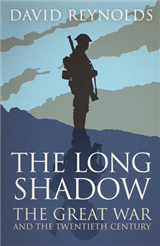