British Library Crime Classics brings atmospheric, nostalgic and cunningly plotted detective fiction back into print. The series focuses on the golden age of British crime writing between the two world wars, and includes novels and short stories by major authors as well as lesser-known work by neglected writers.

Every title in the series is drawn from the unparalleled collection of the British Library, and they are all republished in paperback and e-book with illuminating introductions by well-known experts. 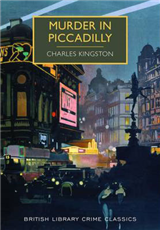 ‘Scores of men and women died daily in London, but on this day of days one of them had died in the very midst of a crowd and the cause of his death was a dagger piercing his heart. Death had become something very real.’

When Bobbie Cheldon falls in love with a pretty young dancer at the Frozen Fang night club in Soho, he has every hope of an idyllic marriage. But Nancy has more worldly ideas about her future: she is attracted not so much to Bobbie as to the fortune he expects to inherit.

Bobbie’s miserly uncle Massy stands between him and happiness: he will not relinquish the ten thousand a year on which Nancy’s hopes rest. When Bobbie falls under the sway of the roguish Nosey Ruslin, the stage is set for murder in the heart of Piccadilly – and for Nancy’s dreams to be realised.
When Chief Inspector Wake of Scotland Yard enters the scene, he uncovers a tangled web of love affairs, a cynical Soho underworld, and a motive for murder.

Charles Kingston (1884–1944) wrote over twenty crime novels in the golden age of British crime fiction between the two world wars. Many of his books – including Poison in Kensington and The Highgate Mystery – are set in London. All have been unavailable for many decades, and Kingston’s work has long been neglected by readers of classic crime fiction.