We have been helping to celebrate Get Walking Week by featuring a selection of books on that subject, signposted with a jaunty banner on our website.  Get Walking Week is a splendid initiative by the Ramblers  (the charity formerly known as the Ramblers’ Association), and aims to encourage us to tread over the outdoors by offering a series of short walking routes in locations across the UK.

All this has, of course, prompted us to think about walking in literature, and the first theme that sprang to mind was the Romantic writers’ obsession with walking, and writing about walking.  According to Thomas De Quincey, Wordsworth notched up some 180,000 miles on foot, while Coleridge’s own Get Walking Decade ended with him becoming the first non-local to scale Scafell Peak in 1804. Coleridge was armed with – among other improvised equipment – a walking-stick which he made by deconstructing a broom (his wife was not, apparently, impressed). These and other Romantic luminaries owed much of the awe and sense of sublimity that inspired their writing to their adventures on foot, many of which involved considerable courage and risk.  You could do worse, during Get Walking Week, than literally follow in Coleridge’s footsteps along The Coleridge Way.

A favourite modern classic in the walking genre is Bill Bryson's Appalachian adventure A Walk in the Woods; for my money, the funniest of his travel-writing books, and one that superbly evokes a sense of place and perceptively describes the effects of arduous travel on a friendship.  Brilliant and hilarious sentences are scattered through the book like pine-cones on a forest floor, and this is one of my favourites:

“Black bears rarely attack. But here's the thing. Sometimes they do. All bears are agile, cunning and immensely strong, and they are always hungry. If they want to kill you and eat you, they can, and pretty much whenever they want. That doesn't happen often, but – and here is the absolutely salient point – once would be enough.”

Finally, and stretching the definition of walking to embrace climbing activities, let me urge you to read or re-read The Ascent of Rum Doodle by W. E. Bowman. This 1950s parody of British mountaineering and derring-do culture is a satirical gem, in which a team of plucky and variously inept climbers – each representing a parodied archetype – is despatched by Sir Hugeley Havering to do battle with the titular peak in distant Yogistan.  Their various misadventures include mangling the porters’ strange, guttural language; battling with the cook’s increasingly inedible and unidentifiable offerings and falling down a crevasse.  Neatly, for the purposes of this blog, the current edition is introduced by one Bill Bryson. 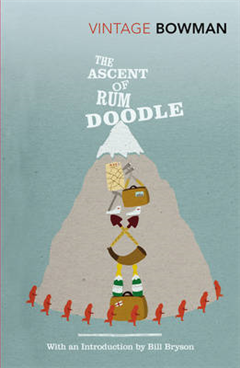