The BBC has launched a 30th birthday commemorative edition of the text-based adventure game based on Douglas Adams’ Hitchhiker’s Guide to the Galaxy. The game has become infamous in gaming circles for its wit, ingeniousness and tendency to ‘kill’ the player, (although registering on the site enables games to be saved, thereby mitigating the dying problem).  The new version has many enhanced functions, includes the ability to Tweet as you play, and has replaced the $, % and ^ symbols with new ones for the Altarian Dollar, Flanian Pobble Bead and the Triganic Pu, ‘not because they are needed in the game, but just because we felt like it.’  Challenge Adams’ fiendish puzzles and become Arthur Dent in the comfort of your own home on this link 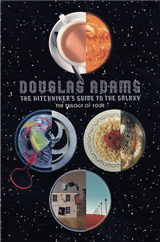 The Hitchhiker's Guide to the Galaxy: The Trilogy of Four