Of all the books from all the lists in all the genres, there are so few that touch on theology, philosophy, love, truth and melons all in one. Some books have good versus evil and light versus darkness and the moral is clear and the message is solid...but if you could see the movement of a small, rheumy eyed tortoise that plummets toward the ground, carrying with it the hope that there will be a better world to smash upon and realise that this the true metaphor for life, death, happiness, freedom and all the abstract nouns inbetween...you could appreciate why Small Gods by Terry Pratchett should be spared. There is no heroic quest greater than the realisation that sometimes, despite wishing it wasn't you that had to do it, the world must be saved and that you, small and meagre, plain and simple as you may be, are the voice in the darkness that asks "Why?" when the rest of the universe says "It must be so." Small Gods' Brutha is that voice, the voice of a man who finds out where Gods go when nobody follows them and although Pratchett plays with words and toys with themes and enjoys tweaking the nose of science fiction in a passive aggressively playful way, the essence of this novel is the true quest for answers.

If we are to ask "Is there a God?" then Pratchett answers "Yes, but don't expect them to help you, didn't you learn anything from the Greeks?" and then he shows us, through sweet, genuine, simple Brutha and his close and personal relationship with The Mighty Om (the disembodied voice of a deity harboured by a tortoise) that it isn't down to faith in the unseen, but belief in the seen that saves us. There are no hydras, no dragons, no dangerous pieces of suspect jewellery, no lions, witches or furniture of any kind to offer obscure metaphors for the magic and mystery of life...Small Gods thrusts two fingers upwards at the random, chaotic nature of the universe and reminds us that no amount of spell casting or sword waving will winkle out the truth when all it takes is the gentlest persuasion and, occasionally, a piece of lettuce. Saving Small Gods is saving the answer to the greatest question of all, when the temple is ablaze, the priests up in arms, the people howl and weep in the streets, in short - when we reach this crucial turning point in our times - "who do Gods pray to?" 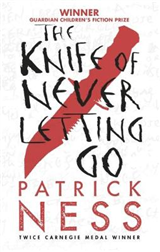 The Knife of Never Letting Go

So many books, so little time to choose which should be saved from the conflagration.

Pratchett or Pullman, perhaps. Or maybe Atwood or Le Guin, Adams or Paolini. Or how about that gem of a book about a dystopian society, TheKnife of Never Letting Go by Patrick Ness - and with luck perhaps the Librarian will scoop up the entire Chaos Walking trilogy, if only he'd drop his ruddy bananas.

This amazing and compelling book for young adults tells the tale of young Todd Hewitt who is the last boy in Prentisstown, a town where if you're male you can have no secrets, no privacy, because everyone can hear each others thoughts. But Todd finds a place of silence and decides to run from the Noise and the secrets, heading instead into adventure, chaos, violence and ultimately friendship. The friendship is with Viola, the first girl Todd has met, and the source of the silence. Together they try to escape from Prentisstown and it's sinister leader, a difficult task considering his pursuers can not only see him but can hear his thoughts too, and this makes for an exceptionally tense and thrilling read.

The book is exhilarating and will hold you in it's grip until the very last page, leaving you gasping for more. Fantastically written with powerful narration whereby an immediacy and connection with the characters is attained via misspelling and a lack of grammar (somewhat like this email), it hooked three generations of my family - my teenage son, myself and my parents. And it's safe to say it broke our hearts too. A book with that kind of power deserves saving for that reason alone.

But maybe this reason will appeal to the animalistic nature of the Librarian: Ness knows how to write dog! Never has man's best friend been so eloquently and exquisitely put into print. So the last word is with you Manchee, so make it good....."Poo, poo, poo." 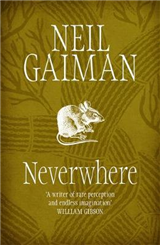 You don't need to have a library on fire to take you right to the Science Fiction and Fantasy sections. Lodged in this corner is a rich selection of literature that encompasses entire new worlds, as well as re-inventing the world we live in. The first and foremost of these writers is Terry Pratchett and we would all weep to see any book burn, much less his. However, as any devoted fan of Mr. Pratchett's will have his entire collection at their disposal at home, his books are not those we would rush to save.

Instead I would have to hover over the G section and let my hands travel to Neil Gaiman’s books. There are many of his popular novels that fans would readily overburden their arms with to save. However, the one novel I would have to save would be “Neverwhere”. This novel expertly explores the idea of invisibility in a big city, something we can all associate with at one time or another. From the homeless persons who are invisible to the caring world, to Richard Mayhew whose good deed in saving Door seems to live up to the adage of “no good deed goes unpunished”. In helping the Lady Door escape her pursuers, he himself becomes invisible to the world and people he knew. However, this selfless act allows him to see his life for what it truly is: a drone in an office making the right choices in marriage and career.

Thank god for the luckless and hounded Lady Door, aristocracy from London Below, who in crossing paths with Richard allows him a freedom he’s never had. Follow Richard though the murky, mucky and quirky Victorian-like London Below filled with dangers that makes the reader feel as alive as the character. Around every corner is a challenge, and with overcoming every challenge Richard is a step closer to returning to life as he knew it. Travel with Lady Door, Richard and their companions Hunter and the Marquis de Carabas and see if Angel Islington leads to their salvation.

Neil Gaiman truly allows the reader to smell, touch, feel and hear London Below. In Richard Mayhew he allows us to free ourselves from the everyday humdrum existence of the “every man” syndrome. Allow yourself a comfortable spot to read this can’t be put down adventure. 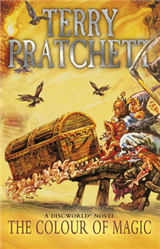 The book I would like you to save from the flames is...

The Colour of Magic:

The first reason I would select this book as one of the best Sci-fi/Fantasy novels to read is due to the title. The idea that something as intangible as magic could have a colour and therefore substance is what first pulls you into this fantastical and yet slightly skewed fantasy world. The book itself is an exemplary tale of sword and sorcery, with a few dragons and space odysseys thrown in for good measure, and yet all putting a humorous spin on the more serious and traditional hero tales we were used to. The characters have more life than the river Ankh and yet even they are almost over shadowed by the detail in the world in which we find them: from stolid and dependable Ankh-Morpork with its whore pits and unique take on in-sewer-ants, to the multidimensional temple of the dread Bel-Shamharoth where our hero once again fails to die. The story takes us from the burning twin cities of Ankh and Morpork where we flee on a series of ridiculous adventures culminating with falling from the disc in an attempt to determine the sex of the star turtle Great A’Tuin. The reader is dragged along meeting familiar characters with a totally different spin: meet Cohen the Barbarian – bad back, bad eyes, no teeth, or Death who is really full of life!

The book in itself is a masterful read however the reason I would also choose this book is because of where it led. It became the focus of thousands of peoples’ imaginations and dreams helping them escape the mundane reality of life on round world. And yet this book not only became our own private Discworld it also connected us to millions of other Discworld users worldwide for the simple reason that we can discuss something which a non-Discworldian will not understand. So this book not only gives the reader hours of quiet enjoyment it also unlocks a door into a global society of Discworld lovers of which you are then automatically a member.

I hope you choose this book to be saved from the flames and enjoy reading it as much as I did,